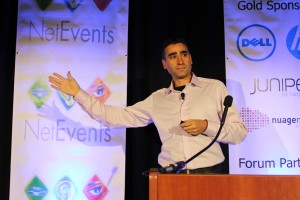 A mix of around 50+ press and analysts representing 25 countries attended this year’s summit. The keynote presentation by Martin Casado, CTO of Networking, VMware covered the intrinsic differences between the creation of a data center by a company such as Amazon who owns and controls the applications and that of the average enterprise.  The benefits of consolidating servers and virtualization are well known but deployment is currently constrained by valid concerns about security, e.g. authorized access to the center must not equate to access to all the resources.  The proposed solution is to employ micro segments having controlled access that is provided by a horizontal security layer.  In a nutshell security must become a data center primitive. That was a short, somewhat simplistic take on a complex issue.

The interview conducted by Michael Howard of Infonetics Research included to need to foresee the imminent arrival of a large flow of data (an elephant) in order to avoid stepping on smaller data flows (the mice).

The debate on “Can we keep Cloud/SDN Open?” introduced and chaired by Rohit Mehra of IDC, underlined the fact that today’s closed networks employing proprietary hardware cannot accommodate the need for the rapid changes as a result of changing business conditions.  Therefore keeping the cloud and SDN open is a must and of course all the panel members agreed.  However, there were different views on the direction: how to get there, when do you open up the architecture, do you go all the way up the stack. In addition the staff who are working in the organization have to be engaged. The issue of infrastructure integration was also discussed.

The debate on “No More Mr. Nice Guy – tightening the screws on Cloud Security”, introduced and chaired by Iben Rodriguez of NSS Labs, covered independent testing.  A key security issue is the need to capture and analyze attack data, to find out what gets exploited, and also to be able to control the administrators.

Guest speaker Said Ouissal of Juniper Networks indicated that telco clouds have unique capacity, latency and scale requirements. They are threatened by the OTT players but have a different mindset and need six to seven months to realize a solution.  It is hard to virtualize legacy hardware and telcos cannot afford to have their network go down.  Said saw an opportunity to build smaller clouds that are located close to the users.

The debate on “Market Forces – can telcos grab their share of a cloud services market?’ introduced and chaired by Jeremiah Caron of Current Analysis, started with a question addressed to the audience.  How many think that telcos are in a good position re the opportunity that Said have indicated?  Only two hands went up.  Research stats that Jeremiah showed confirmed that view but he indicated that telcos have the requisite resources, one being their strong relationship with enterprises, so maybe “Slow and steady will win the race”.  Time will tell.