It’s time to be open about connectivity

Does it matter how open a network is? Do the values of open source development translate well to something as mission critical as enterprise-grade wide area networking? These were the kind of questions overhanging the earliest developments in open networking at a time when a large proportion of corporate networks were based around the proprietary vision of a single vendor. Well, it’s several years on, and open networks are now accepted as the obvious way forward by most market watchers.

For evidence just look at the community that has built up around the Software for Open Networking in the Cloud (SONiC) network operating system. The open source, Linux-based NOS has garnered a huge community of developers and users that are between them already changing the way large and small enterprises, hyperscaler cloud giants and communications service providers provision and operate networks.

SONiC is by no means the only open source NOS out there, but it is the one to watch if you want an idea of where open networking is going. Developed by Microsoft and open sourced in 2017, it decouples network software from the underlying hardware and lets it run on switches and ASICs from different vendors, at the same time as supporting a full suite of network features. SONiC is backed by some pretty influential vendor names, like Dell, Arista, Nokia, Cisco, Juniper, NVIDIA and VMware. It is the power behind Microsoft’s Azure networking services.

Independent voices concur. Analyst firm IDC believes that the SONiC-driven data center switch market will be worth $2 billion by 2024. IDC has called SONiC the ‘Linux of networking’, seeing it as the leading open source flag waver for network disaggregation and the move towards the modular decoupling and composability of individual software functions.

While today it is deployed largely in Ethernet switches in cloud-scale data centers, SONiC’s reach will soon embrace leaf-spine networks, converged networks and other such mainstream connectivity use cases. It looks set to figure in 5G and telco-cloud edge situations as we get nearer to a full 5G technology stack, and as the importance of 5G in the enterprise keeps rising.

And SONiC keeps getting more mature, thanks to its reservoir of developer supporters. Its open source nature means it draws on a large talent pool beholden to no single vendor vision. Members of this community share problems with co-collaborators and take advantage of a world of skillsets to build better and more enterprise-friendly applications. Time can only make this community stronger.

The following virtual event will delve into the future prospects of open networks in enlightening detail, and should be regarded as mandatory for anyone with an interest in researching this area:

Open Networking – Agility and Control for a New Era of Connectivity

It will feature the following participants: 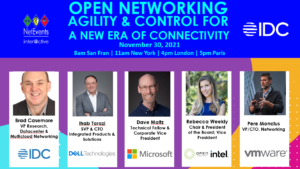 By Guy Matthews, Editor of NetReporter

In the tech sector, NetEvents has provided a key communication channel over the past 20+ years. It fosters creative and profitable relationships between press, analysts and bloggers plus tech companies, technologists, industry CIOs/Senior execs and IT Buyers, channel partners and Solution Providers, as well as the tech investment community. NetEvents offers an efficient and highly productive complement to any existing market communications program.