MPLS has served enterprise network needs well for the past 20 years. But there is no getting away from its negatives. MPLS is expensive, complex to deploy and inflexible, which makes it ill-suited for the cloud-first requirements of next generation enterprise connectivity. So what should we all be thinking about as we start to embrace a future of cloud networking?

There comes a tipping point every once in a while when one technology makes way for another that is better suited to contemporary needs. In early 2000s, for example, there was a big transition in enterprise networks where the world migrated in short order from the likes of ATM, Frame Relay and private line networks towards MPLS which was far better tooled up for the transport of Internet-based traffic. MPLS, and the dedicated IP VPN market, has had a great run of it, but now the time has come for another shift. And this time it’s all about things like cloud networking and connectivity defined by software.

MPLS is still heavily embedded and will take time to shift into the history books. Newer markets, such as that for carrier managed SD-WAN services, have been growing fast, points out Erin Dunne, Director of Research Services with independent analyst firm Vertical Systems Group. But MPLS alternatives like this represent only a tiny part of the overall market opportunity, maybe around 5%. “Carrier-managed SD-WAN is certainly moving faster than certain other types of services,” she points out. 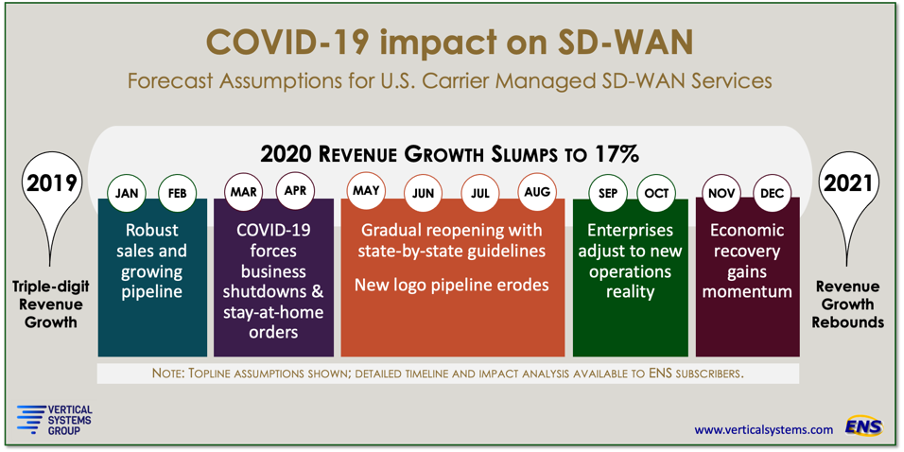 Figure 1: A timeline for SD-WAN adoption

So where did carrier-managed SD-WAN get to after a year of lockdowns and work from home? Figures from Vertical Systems Group show triple digit growth for 2019, while those for last year reveal a slump of 17%. “Despite a tough year, carrier-managed SD-WAN has been one of the bright spots for the overall networking market. Growth is rebounding, we’re seeing that already.” 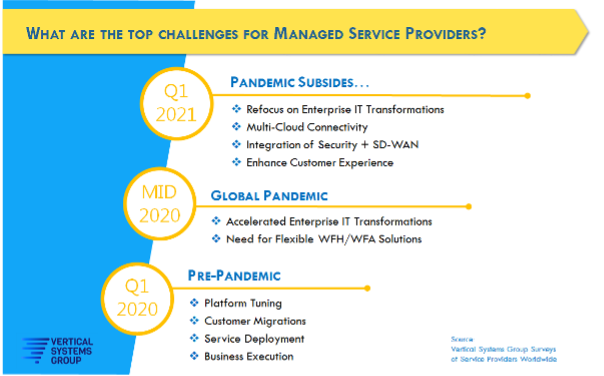 So what are the big challenges for managed service providers as they seek both to emerge from a pandemic-driven slowdown and also transition to a post-MPLS world? “COVID was a major trigger that forced a lot of transitions,” says Dunne. “The first is migration to the cloud. And the second is ‘work from home’ and ‘work from anywhere’ solutions. Service providers that were just dipping their feet into this market had to manage this transition for their enterprise customers. With the pandemic subsiding we hope we’re starting to see a movement back to longer term planning. Service providers need to deal with backlogs, address multi-cloud, refocus on transformation, and think about the customer experience again.”

To help clarify this issue, Dunne questioned a number of stakeholders in the connectivity market to ask how the global pandemic has impacted the demand for network services, and get a feel for the longer term outlook.

Tata Communications serves enterprises around the world with managed network services. Song Toh, Vice President, Global Network Services with the company says it entered 2020 with great plans: “Then the world turned upside down,” he says. “It has impacted some enterprises and put some plans on hold. Now they’re continuing with digital transformation, which requires the network to transform as well. The long term outlook is positive. Infrastructure needs to be refreshed, network bandwidth needs to go up for the IT systems and cloud migration that has been planned.”

Ashwath Nagaraj is Co-founder and Chief Technology Officer with Aryaka, a provider of software-defined network connectivity. He believes what has emerged from the pandemic is nothing less than a new networking topology: “A user can be at home, at a branch, at a data center, at headquarters. Your data can be in a data center in the cloud, and can be at home. This has made the web far more important than it ever was to the enterprise business. And this change is here to stay. Not everybody is coming back to the office. So where is that office budget going to go?  It is going to help transform your business, deliver the killing blow to some older networks while empowering the IT organization to deliver productivity to employees.”

Mike Frane is Vice President Product Management, Windstream Enterprise which delivers security and managed services to businesses across North America. He agrees that networks and connectivity are now more important than ever: “We saw many customers accelerate their deployments to deliver on the flexibility and adaptability that they knew they would need to weather the uncertain times ahead of them. I’ve seen a resurgence in the last half of 2020 and our enquiries and sales of SD-WAN continue to build. Customers see SD-WAN as a highly agile option that lets them rightsize their network and their bandwidth as they shift their business and operational models. Customers are going to look for a network solution that easily provides flexibility and reliability for their physical locations.”

Frane however believes it will be the business, not IT departments, that will be the driving factor behind network transformation: “It’ll be the business that sets the direction from a network perspective. Businesses and their operational model, and how they reach their customers, is going to change in the future.”

Nagaraj of Aryaka challenges Frane’s position: “Sure, businesses need the transformation, but where’s the money coming from?  It has to come, I think, from the IT department coming up with creative ideas on how they can really transform the needs of business. That’s how I see it.”

In either instance, there is a job to be done by service providers, supported by vendors, of supporting enterprises where MPLS is still the VPN of choice.  MPLS might be somewhat inflexible, but on the plus side it meets the ‘five nines’ needs that a lot of enterprises have for their applications. What is to be done to help those MPLS devotees to move on?

“The reality of the market is that MPLS has a long tail,” says Frane of Windstream Enterprise. “There are still customers out there who rely on TDM connections for the functioning of specific applications. And there are many reasons for that.  In some verticals the regulatory environment may necessitate the use of MPLS. Some applications have been specifically designed to work over the MPLS network and might not be readily portable to the cloud. In others, there may be a strong emotional attachment to the way that the network has always worked. MPLS is going to be around for a long time.”

There is, believes Frane, no easy button for transition, not least because migrations take careful planning and time to execute: “It’s not just about simply swapping out one network technology for another,” he points out. “It can also require a shift in mindset, an application model, as well as in some cases the operational model of the business. There is a growing comfort with enterprises and organizations of moving to an Internet model with SD-WAN as the overlay, but we still see that the predominant model is a hybrid one with MPLS.”

“The King is dead, long live the new King,” adds Nagaraj of Aryaka. “What MPLS brought to companies was reliability, stability, quality and security. And so the hybrid network remains. But what’s killing MPLS is that you can’t put an MPLS connection to everybody’s house. The home worker is going to be 40% of all the total number of hours of work. So you have to incorporate this 40% into your network, and I think that is really where MPLS struggles right now. This means that the world has to move to a new network, now.”

Toh of Tata Communications points out that migration will naturally happen at different rates in different organisations: “Some will start off pretty aggressively, going 80%, 90% to cloud. In that situation the hybrid network will have a lot less MPLS in it. The reason why MPLS stays is because some applications are still very sensitive to jitter and latency. If you have a globally distributed operation, you cannot switch straight over to Internet and hope that everything works perfectly. I’m not actively killing off MPLS for my customers, but if they are ready, and they’re looking for the agility, then that will be SD-WAN plus a mix of underlay that’s probably more Internet and MPLS.”

So what are the experiences of those who have made the move and find themselves free of legacy constraint? Are they noting, for example, cost savings after a move from MPLS to SD-WAN?

“There’s a lot of hype from vendors about how much SD-WAN is going to save you,” acknowledges Frane of Windstream Enterprise. “In reality we find customers spend about the same or maybe even a little bit more, and the conversation is really about the value that they are getting moving from a 100Mb MPLS connection to SD-WAN with maybe Ethernet at 50Mb and a broadband connection. It’s going to cost you about the same, but you’ve got 10 times more download than you had before. You’ve got resiliency built into it, you’ve got your dynamic multipath optimization so your applications will run better.  The value that the network is bringing is also a piece of the education.”

“The most important thing that happens when you move out of MPLS in my mind is security,” says Nagaraj of Aryaka. “You can get peddled snake oil with security. But unfortunately the consequences of that are very severe.”

Perhaps the biggest upshot of the current transitional phase we are in is that the topology of the network has changed, says Nagaraj. “The WAN is now the centre of your enterprise business. That’s partly because of the home working. As the CEO of a company, you are now empowered to transform the business much more than you were before because you have the tools to really change the structure of your business. If you are looking for reliability, security, stability, that’s where people like Aryaka are interested in talking to you. We feel that all of those are critical, and we want to address that.”

Operating models across industries have changed dramatically due to the last 12 months, agrees Frane of Windstream Enterprise. “SD-WAN and cloud security are going to give enterprise organizations the ability to adapt to the new normalcy of uncertainty. Whatever happens with workforce shifts, you’re still going to need connectivity at home and you’re going to need the connectivity in the branches. It’s not an ‘either or’ model going forward. In fact, in many ways everything becomes much more complex for the enterprise to manage.”

By Guy Matthews, Editor of NetReporter

What does it take to make multi-cloud work?

In the tech sector, NetEvents has provided a key communication channel over the past 20+ years. It fosters creative and profitable relationships between press, analysts and bloggers plus tech companies, technologists, industry CIOs/Senior execs and IT Buyers, channel partners and Solution Providers, as well as the tech investment community. NetEvents offers an efficient and highly productive complement to any existing market communications program.